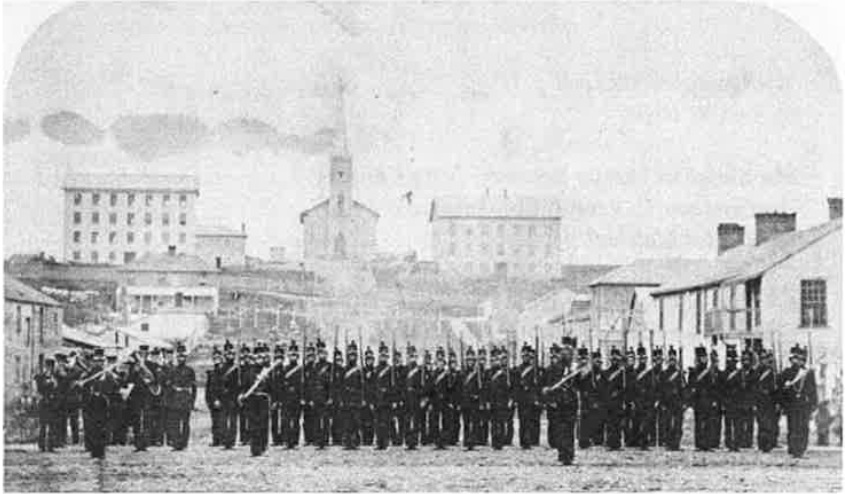 Background
A new Militia Act of 1855 provided for the formation of an active militia to consist of volunteer troops of cavalry, field batteries, and foot companies of artillery and 50 companies of rifles. Rifle companies were to have at least 60 men aged between 18 and 60.

An advertisement in the Guelph Tri-Weekly Advertiser, dated 21 February 1856, by J.J. Kingsmill, asked persons interested in forming a "Volunteer Rifle Company" at Guelph to contact him. Officers voted in at the meeting were Captain John J. Kingsmill, Lieutenant Nathaniel Higinbotham and Ensign Armstrong. Rifles and Company stores were stored in the new town hall after 1858.

The Company was first called out for duty to assist in quelling a riot between the Irish Protestants and the Roman Catholics on 12 July 1856. They were also called out the next year to keep the peace.

The first Inspection (on Macdonell Street) of the Guelph Volunteer Rifle Co. was 15 October 1857, by Baron de Rottenburgh, Adjutant-General Militia. The Third Annual Inspection of Guelph Rifle Co. was 13 April 1858 by Lieutenant Colonel McDougal, Inspecting Field Officer of Upper Canada. The Company marched to the Grand Trunk railway station to meet the Inspecting Officer and presented rifles, then under Captain Nathaniel Higinbotham. 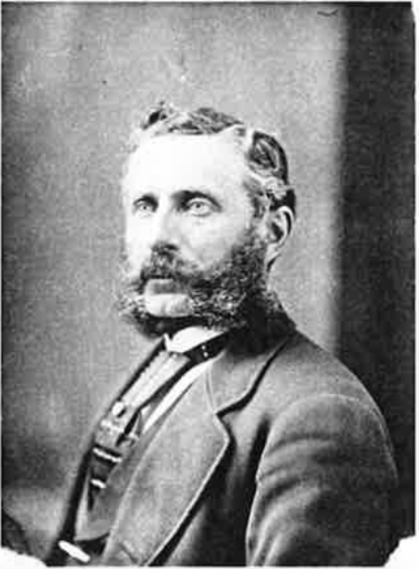 No. 1 Troop Volunteer Cavalry Corps, or Guelph Cavalry Corps under Captain Hemming, was active from 1860 to 1866. They volunteered for service at the front in 1866 but were not called to active duty.

The Guelph Drill Association was formed in 1866, a response to the threat of Fenian raids along the border. They wore a scarlet uniform. They drilled, paraded and marched under Captain Morris. William Kingsmill, writing in the newspaper, offered them this advice:

"Rome was not built in a day" and if they wish to deserve success--and command it they cannot--they must in their several vocations--whether civil or military--put on the armour of patience, and work untiringly and unflinchingly. Let me in conclusion offer them a soldier-like hint, which I am sure will be received in the spirit in which it is offered. Careful obedience, a steady head and hand, as well as a silent tongue in the ranks are a "sine qua non"--in fact indispensable--in formation of well-drilled soldiers.

The outbreak of civil war in the United States in 1861 was followed by excitement in Canada over the Trent Affair (United States vs. Great Britain) and Fenian activity in the USA. The possibility of war led to increased drill and organizations took advantage of instructors provided by the government to drill volunteers and form into volunteer companies. 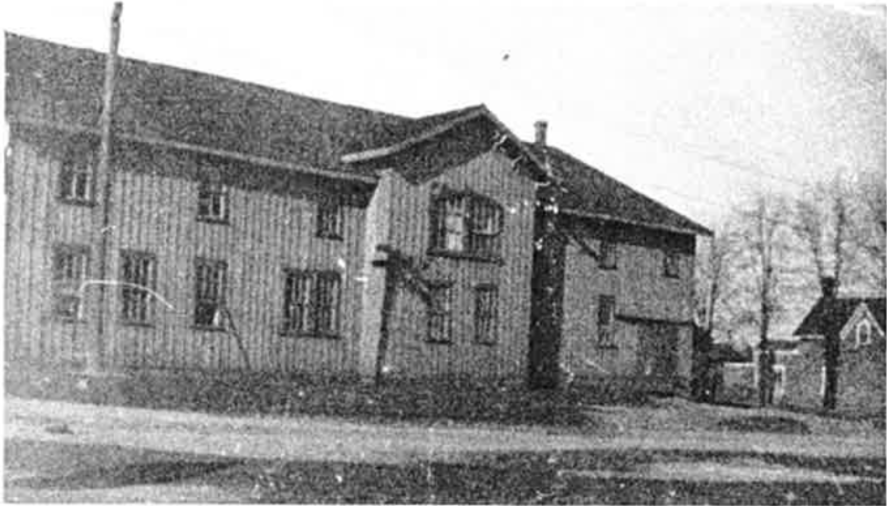 Drill sheds were built in communities having a militia company. As drill of the militia usually had to be performed in the evenings after the ordinary daily work was over, it was necessary to obtain a large well-lit hall or barn. The difficulty in finding such a building in a rural community was enormous. However, since drill was only held three nights a week, the shed was available for other community uses such as agricultural shows.

In November 1864, David Allan and 114 others petitioned Town Council to erect a drill shed. The stated purpose of the building was "for military and county agricultural society use". It would be used for poultry and agricultural shows, flower shows, musicals, festivals and other local events. The market hall was too small for such events. Nothing happened.

At a meeting of the Town Council in January 1865, the question of the erection of a drill shed was again brought up for settlement. During the previous year the County Council had made an appropriation, as also did the Township Council, towards the building of such a shed, it being hoped these amounts would be supplemented by the Militia Department and the matter was left to the management of the Town. 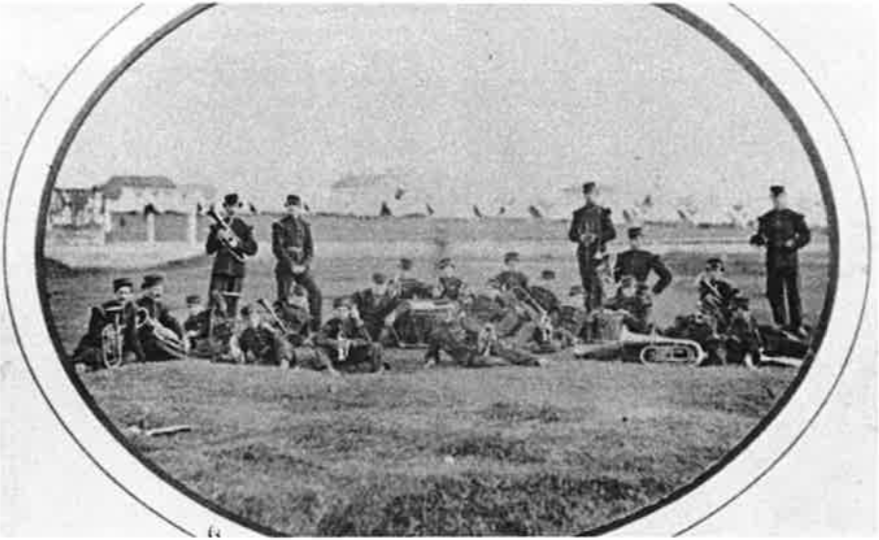 The Band of the 30th Wellington Battalion of Rifles, circa 1857. Guelph Historical Society Collection.

On 6 February 1865, Alderman Elliott again presented the petition from David Allan and 114 others for the erection of a drill shed. The petition was referred to a special committee of Council consisting of Robertson, Higinbotham, Gow, and Romaine with instructions to procure a rough sketch and approximate estimate of the cost of a suitable building for the purpose and report at the next meeting of Council, and that they are empowered to communicate with the government and the County Agricultural Society.

Tenders were advertised and a plan was prepared by architect David Murray which was provisionally accepted. This plan was for a two storey building, 80 by 300 feet--more of the Crystal Palace type than the ordinary drill shed--it being proposed to use iron and glass to a large extent in its erection. It was octagonal in shape, the main building to be 39 feet in height to the eaves, the lantern in the centre to rise to the height of 80 feet. The plan and sketch were presented to Council on 23 February 1865, with an estimated cost of $4,000.

The Minister of Militia stated that grants for the year had been expended and no funds were available. After further consideration Council rejected Murray's plan and sent the matter back to the Drill Shed Committee, with instructions to obtain a plan of a building to cost not more than $2,000. 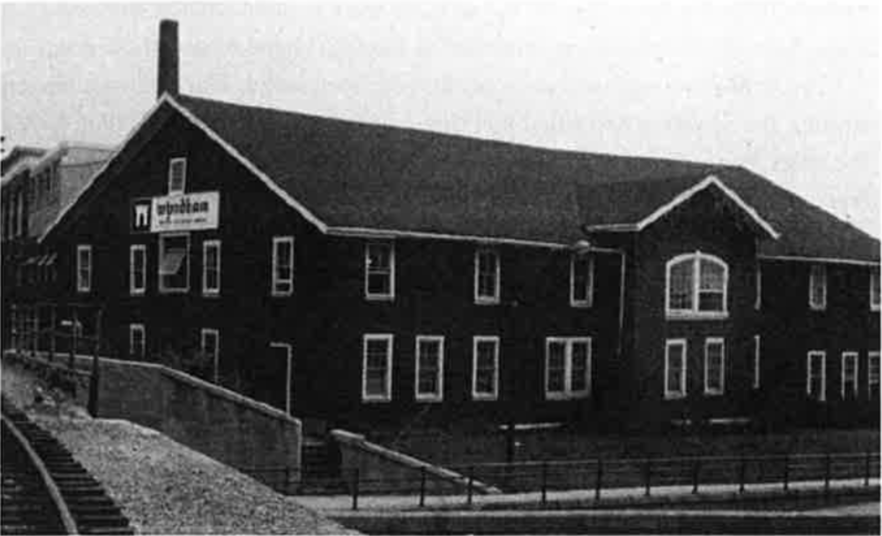 The Drill Hall, circa 1973, with its original brown paint colour. Image courtesy of Wellington County Museum and Archives (A1985.110).

On 26 October 1865, Council decided to proceed with the available funds ($1,600) and erect a building suitable for an Agricultural Hall and Drill Shed. David Murray, architect, presented his report with a sketch for a new building of wood, 300 feet long and 75 feet wide, and a height to the eaves of 12 feet and 56 feet at the apex. He estimated the cost at $2,894. It was too high.

The Drill Shed Committee asked local engineer T.W. Cooper for plans for a drill shed. They approved his plan on 12 April 1866, and put it to tender. On 19 April 1866, the tender was granted to James Barclay at $2,498.

The structure would be a large rectangular wooden shed covered with a reddish brown fire-proof paint. For the present it would remain a shell, built of upright boards with crevices hidden by narrow strips of wood. It was 100 feet by 63 feet and 23 feet to the eaves. The roof was shingles embedded in plaster. The stone foundation was four feet below grade and two feet above grade. Heating would not be needed for drill and agricultural purposes. In April building material was offered by the 30th Battalion Band Cornmittee to build a gallery in the Drill Shed. By June the building was progressing well. The ground was levelled around the drill shed and a street lamp was put in. A picket fence was built around it.

The first use of the drill shed was 17 July 1866 when the Guelph Horticultural Society held its Spring Show. The next celebration was for the returning Guelph veterans from the Fenian Raids. Over 1,200 were in attendance at the new Drill Shed. An engraved pistol was presented to Captain Higinbotham at the event.

The drill shed was used as a public hall, for Guelph Horticultural Society exhibits, the Salvation Army first met there, and the place to see travelling shows. The stage was larger than that in the Town Hall. The building had no ceiling. There was a stage at the south end and dressing rooms on each side, This was originally a two-storey austere building with a gallery. The 50th Anniversary of the Town in 1877 was celebrated in the Drill Shed.

The Field Battery stored its guns and wagons in its own building on the fairground which was not large enough and stored two guns in the drill shed. The heavy artillery guns broke through the floor. The City asked the government to repair it at a cost of $700.

By March 1887, the Drill Shed was very dilapidated and Council asked for an inspection and estimate of the repair cost, hoping for a grant from the government. The results were not satisfactory.

In September 1889, the Williams, Greene and Rome Co. of Berlin, makers of shirts, collars and cuffs, obtained an exemption from taxes for ten years and agreed to use the drill shed at no rent if Council raised the flrst floor with two-inch thick planking, double-inch flooring on the second floor; lathed and plastered walls and ceiling and window frames with sash weights and shingle the roof. The detached engine house, 18 feet x 20 feet, was to be bricked and use was granted for the vacant land in rear. The company was to install machinery and employ 50 people.

The Drill Shed was leased to the Louden Machinery Company at the end of 1902, makers of potato machinery. This company expanded and moved to Crimea Street and the Drill Hall was taken over by Aspinwall Machinery Co., makers of potato machinery in 1911. Aspinwall remained there until 1923. In 1938 the Drill Shed was used for storage by the Guelph Board of Works.

The Guelph Armoury opened in 1911 and the need for the drill shed was over.

Editor's Addendum:
The Drill Hall was sold to MetroLinx GO in 2011 and is currently vacant.