Erica Morant, former Guelph Historical Society archivist, always insisted on, "Getting things right." She succinctly expressed her view of the purpose of archives and, "Getting it right," in a February 1996 GHS Newsletter:

"It is from archival materials that researchers, historians, and writers find the base from which they develop their finished presentation... such records paint the life and times, successes, and failures of individuals and groups, thus helping later generations gain insight to the past."

Erica died on July 21, 2010, after a bout with cancer. "She didn't give in to physical difficulties - even when she was in great pain. A very brave person, when she was diagnosed with cancer, she said, 'I'll just keep going,'" commented The Rev. Canon Jean Mitchell of St. George's Church.

Erica was born in Munich, Germany on January 16, 1924. After completing her education and working for a time in a Munich business office, she met and married a young engineer, William Morant. Following World War II, the couple and their infant son, Paul, emigrated to England where William had obtained employment. They moved to Guelph in the early 1960s, since William had accepted a job in engineering at the W. C. Wood Company. A daughter, Elizabeth, was born in 1965. William died in 2003.

At Guelph Collegiate Vocational Institute, Erica was a volunteer for an unprecedented 14 years in the library. She played a significant role in establishing the archives for Guelph's Historic Secondary School. Her devotion to the development and maintenance of the GCVI archives was so intense that a special room was made available for her archival work. She was very skilled at constructing historical displays for school reunions and other major school events.

"Erica was a really organized, meticulous, and truly dedicated person who spent hours and hours working on archival projects. She especially enjoyed looking after the silver trophies and trays! We considered her to be a member of the GCVI staff. When she 'retired' as a GCVI volunteer, we celebrated her retirement along with the regular retiring teachers."

Since she became a member of the Guelph Historical Society in the early 1970s, Erica was unrivalled in her commitment to ensuring that Guelph's rich historical documentation remained intact. According to former GHS president, Ross Irwin:

"Erica supervised the move of the archives to the present location (100 Crimea Street) and set up her four filing cabinets. She spent much time indexing old documents and identifying old photos. I was amazed at the material she acquired." 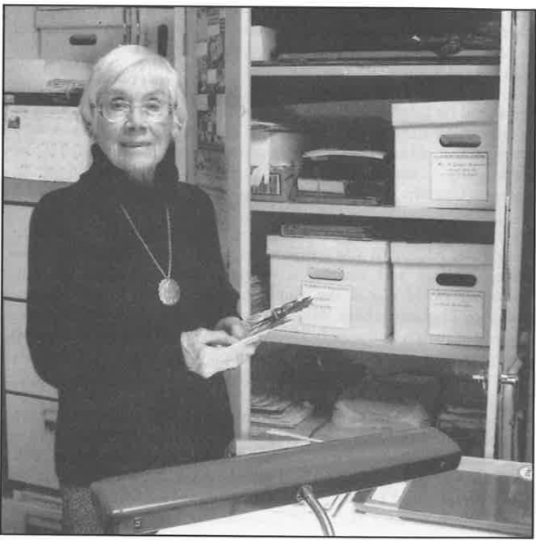 Erica was very protective of the organization and condition of the archival materials. She implored everyone who used them to take extra care - if one didn't, they risked being firmly admonished!

If being the GHS archivist wasn't enough, she also edited the GHS newsletter. Erica insisted that the newsletter facts, written grammar, and spelling had to be impeccable. Along with this responsibility, she put together numerous historical displays which she took to various shopping malls, churches, and schools throughout Guelph. In 1998, Erica was honoured for her GHS work by receiving a ten-year Ontario Volunteer Service Award. "A well-deserved recognition," said former president Irwin. 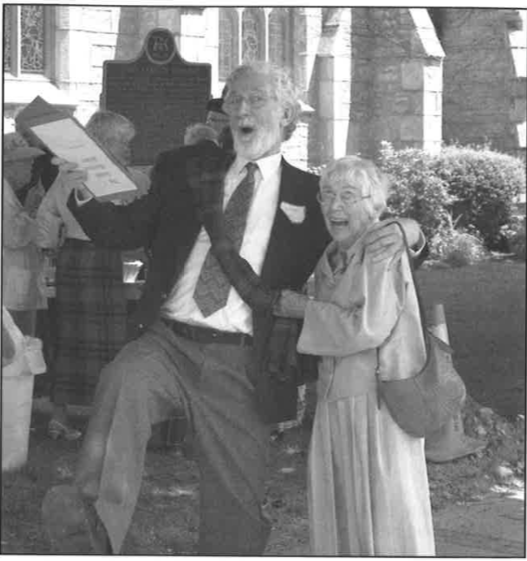 In recent years, Erica took on the task of being the archivist for St. George's Church, her cherished place of worship. Once again, she unleashed her formidable organizational skills on what appeared to be an impossible job. Important church registers, documents, photos, structural drawings, and artifacts were everywhere and unrecorded. She was up to the task! After countless hours of work, St. George's Church now has an operational "Archives Department." There have been many inquiries which have been answered efficiently and accurately.

Erica didn't spend all of her time thinking about archival activities. She was an avid gardener. Daughter Elizabeth pointed out: "She had a passion for nature and loved the garden and her plants." She did have a major garden problem she couldn't solve - Erica fought a losing war with squirrels. "She was always trapping them and then releasing them in Riverside Park," Elizabeth said.

The home in which Erica lived until her death was custom designed and built in the 1960s for the Morant family. Her home was a source of great enjoyment for Erica; she kept it immaculately maintained. "Mother loved antiques - especially English stuff and China, and was happy when she found something valuable in a second-hand store," said Elizabeth emphatically.

Erica was enthusiastic about outdoor activities - she loved hiking, cross-country skiing, and cycling. She was a member of the Field Naturalists Society and a leader of the Junior Field Naturalists Club. Erica was a familiar figure riding her bicycle around the streets of Guelph. She was a great fan of healthy food and would often be seen on her bike with the saddle-bags loaded with fresh produce from the Saturday Farmers' Market. She never did learn to drive; it was only recently that she had to give up riding her bike.

Erica liked to travel. Although she had visited abroad, she preferred to travel, by bus, to places across Canada and the United States. Just weeks before she died, she insisted on taking, "An always wanted to go on," trip to Newfoundland... by bus, of course!

This very private, independent, intelligent and, "Get things done," lady has quietly done much for the enrichment of the community of Guelph. Erica Morant's methodical and extensive archival work, accomplished with such dedication, diligence, and accuracy will be of great value for generations to come - a quiet champion for many.