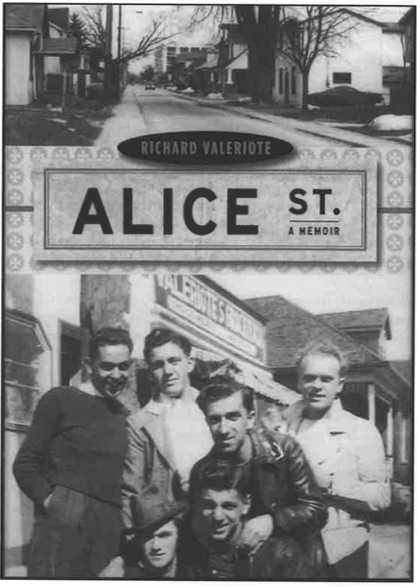 At one time Alice Street in Guelph's Ward One was terra incognito to much of the City's Anglo population. Many people did not go into The Ward, and they did not allow their children to go there either. This divide stemmed from animosities between natives and newcomers accentuated by geography. The area across the river from Guelph's Downtown had early become industrial, and so attracted an immigrant and working-class population that worked in the shops and factories reliant on water resources. Bounded by both the Speed and Eramosa Rivers, this area was also prone to flooding, and it was thought to be unhealthy as it was low-lying. The Guelph Junction Railway bifurcated this section of City, and for a while served as a vehicle for a red light district along Sackville Street. Officially named St. Patrick's Ward to acknowledge the section's Irish and Catholic populations, even Anglicans appropriated the name of the Irish patron saint for its small church on York Road at Harris Street.

Italians became the first significant non-English-speaking element in Guelph after 1900. The advent of cheap electricity through Ontario Hydro and high emigration from Europe permitted industrial expansion. The new arrivals came from Italy's north and south, with most settling in the Ward because housing was cheaper and work close. A trickle at first, with sojourners intent primarily on sending money back home rather than settling, Guelph's Italians were separated by more than language, religion, or social class. As Ontario adopted Prohibition during World War I, Italians accustomed to wine - and to making their own alcoholic beverages - would have none of it. The Ward acquired an exotic reputation as home to stills, speakeasies, and brothels which challenged majoritarian values. Politics confirmed the divide. Mussolini and fascism were admired by many local Italians for the efficiency brought to a frequently chaotic country. While Italy had been an ally in World War I, in the next it formed one of the Axis powers. Some Italians had to register as foreign aliens and appear weekly at the Downtown police station, but a good number of second-generation Italians also enlisted in the Canadian Armed Forces.

The culture of Guelph's Italian immigrant communities has been largely lost to history, but an arresting memoir by Richard Valeriote helps in some part to remedy that deficiency. Richard Valeriote is today a retired physician living in California, but he was born on Alice Street in 1929 to Michele and Elisabetta Valeriote who had settled in Guelph sometime after 1900. They helped to bring four Valeriote brothers to Guelph, and themselves had 16 children, six of whom died before the age of six. The couple ran a grocery and retail operation on Alice Street, but as Michele fell into depression later in life Elisabetta inclined more towards the religious and charitable activities. She pursued, "Dio lo vuole," or "God's Will," - which frequently passed from Elisabetta's lips and showed resolution in the face of adversity.

Richard Valeriote's memoir is rich in the culture of an immigrant community - poor, but striving for better conditions and material wealth. Some residents around Sackville and Alice Streets had so little income that they followed the trains at the roundhouse there to gather unburned coal discarded with the engine box embers. The support of the larger family was all important and the labour of everyone but the most elderly was vital to the family's economy. Richard's parents were better off than many even if they had to scrimp to get by. They loved music - they had a piano on which they played the music of Guiseppe Verdi, and listened to opera on the radio. A boy as bright and ambitious as Richard Valeriote knew the importance of family, but he also resented the inequitable treatment charity cases such as his received at the Catholic Brebeuf Camp near Rockwood. He also feared the brutal discipline - wooden spoons hitting on the head - of the nuns at Sacred Heart School, though extreme punishments in the name of discipline pervaded most schools well into the 1960s.

Much of Valeriote's autobiography is consumed with his intense desire to get a university education and to become a physician. Without government or private scholarships readily available, much of his time at McGill University in Montreal was spent returning to Guelph in search of loans wherever he could get them - which meant not at the banks and trust companies as he had no collateral. Sacred Heart Parish helped and the father of architect Richard Pagani, a contractor, lent him money. So, too, did Guelph Collegiate principal Fred A. Hamilton, and the manager of the Dominion Bank, but as a personal loan out of his own pocket. Interest and capital repayments were sometimes forgiven.

The personal struggle to succeed that is front and centre in this memoir forms part of its engaging honesty and straightforwardness. Glimpses of bigotry and prejudice that Italians sometimes encountered are recounted, but they appear never to have been extreme in Richard Valeriote's experience. The author sticks to what he remembers and thereby naturally excludes much about the Alice Street Italian community. Reference to mafia activity is fleeting, and there is no discussion of the Sons of Italy or the attractiveness of Mussolini. Nor is the building of whiskey stills, bootlegging, or the factory work of both women and men mentioned.

This charming account of growing up formally ends with Richard Valeriote marrying an American woman, becoming a physician, and moving to the United States. The book might have ended there, but unfortunately, Valeriote extends his work by including some physician's general recollections that a good editor might have excised. Such is a minor failing in an otherwise enjoyable book that tells us much about Guelph, a part of its Italian communities, and immigrants generally.