In 1827, John Galt, an agent of the Canada Company, founded the hamlet of Guelph. The first tree was felled at a site now located west of the junction of Wellington and Macdonell Streets. It was here that the plans for the future town of Guelph were laid on April 23, 1827.

In August 1827, Galt announced plans for laying the foundation stones of the first two stone buildings in Guelph. One of these buildings was intended as a bank to be located near where the Grand Trunk Railway Station stood in 1855. However, within a few years the bank was demolished to make room for a two-storey brick dwelling.

The second stone building constructed was a schoolhouse. According to local sources, it was located a few drains south-east of the site of the Grand Trunk Station. In August 1827, Galt wrote,

"I am laying the foundation of an academy... I have got a school already open in a shed..."1 He reported that the Canada Company had allowed him to, "Reserve one half of the money arising from the sale of the land in the town for that purpose, by which I have already upwards of two thousand dollars in store."2 He put the money towards the building of the new stone school. The stone schoolhouse became known as Galt's Academy.

Galt was also a strong supporter of education for citizens. In his autobiography, Galt wrote:

"Education is a subject so important to a community that it obtained my earliest attention, and accordingly in planning the town I stipulated that the half of the price of the building sites should be appropriated to endow a school, undertaking that the Company in the first instance, should sustain the expense of the building, and be gradually re-paid by the sale of town lots. The schoolhouse was thus among the first buildings undertaken to draw settlers."3

The Centennial edition of the Guelph Mercury in 1927, stated that Galt appreciated the advantages of the liberal education that he had received and,

"Resolved that the children of his newly founded town should have the best teachers, the best accommodations, and equipment available to secure, at least the foundation of a good elementary education."4

The stone schoolhouse was a small, one-room building 16 by 30 feet, known for decades as the 'Stone School.' It could accommodate 40 pupils. Among the first pupils were William McCrea, Robert Thompson, James Thompson, Gordon Matthews, Francis Matthews, and Christina Matthews (three of the schoolmaster's children).5 The Stone Schoolhouse was a common school. 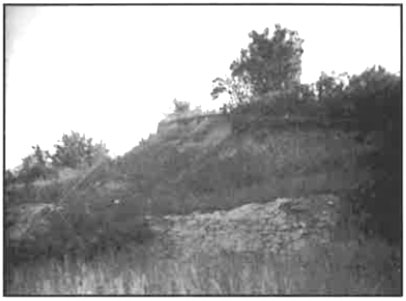 The remnants of the old stone schoolhouse, also known as Galt's Academy.

The educational system in Guelph remained essentially the same until Wellington District was created in 1842 and Guelph was named the District Town. As the District Town, Guelph was eligible for a grant of one-hundred pounds sterling to pay the salary of a Grammar School teacher.

The 1841 Education Act created a Common School Fund, which was to be financed and sustained by the sale of public lands set aside for that purpose. The income from the fund was to be supplemented by additional grants up to the amount of 50,000 pounds sterling per year. This amount was divided among the districts on a per capita basis, which was comprised of all children between the ages of five to 16 years.6

In 1842, local administration of schools was placed in the hands of township commissioners at the annual meeting of Guelph Township. The township was divided into seven school districts: No. 1, York Road; No. 2, the Town of Guelph; No. 3, Waterloo Road (Avenue); No. 4, Paisley Block; No. 5, the Concession Division D; No. 6 Woolwich Road; No. 7, Eramosa Road.

THE SCHOOLHOUSE IN THE COMMUNITY

During the early years, the Stone School accommodated many community uses. In an article printed in the Guelph Evening Mercury in early February 1866, Mr. J. C. W. Daly reminisced about the Church accommodation in Guelph in 1832. He said the stone schoolhouse was also used by all denominations at that time. Mr. Daly who was then agent for the Canada Company kept the key to the schoolhouse. He gave it to the Roman Catholic priest on Saturday night who held services on the Sabbath morning. The Methodists then followed at 10:00 A.M., and the adherents of the Church of Scotland, Reverend James Smith, officiating, used it between 11 A.M. and noon. 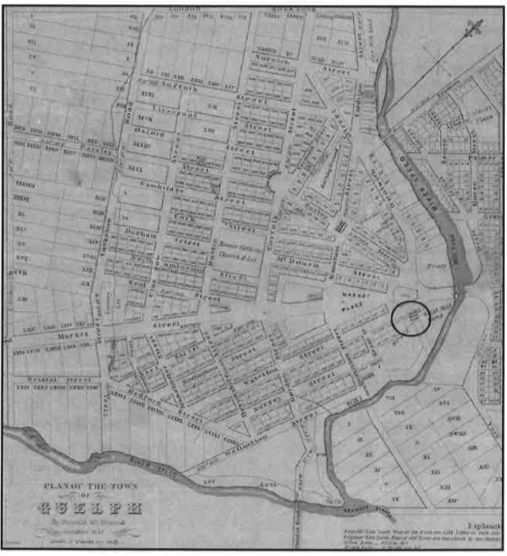 Plan of the town of Guelph by Donald MacDonald, October 1847. The schoolhouse and lot are indicated on this map.

The stone schoolhouse was used as the meeting place for the Presbytery of York when they met on February 8, 1832 to induct the Reverend James Smith as pastor of the Guelph congregation.8 The members of the Presbytery present at the meeting were: Rev. Mr. Sheed, Moderator; Rev. Mr. Rintoul, York; Rev. Robert McGill, Niagara; and Rev. Alexander Ross, Aldboro.9

The schoolhouse continued to be used as a meeting place and a Sunday school until 1852 to 1854, when it was abandoned because of the noise of the trains from the Toronto and Guelph Railway.10 After the railway came to Guelph, the Stone School was allowed to deteriorate. The Bell Piano and Organ Company purchased the lot and the site was listed as a lumber yard during its term of business in Guelph. The Bell Organ and Piano Company ceased operations about 1930. The lumber yard was dismantled and the whole area was overgrown with weeds, grass, and shrubs. The site of the first stone schoolhouse was forgotten by civic officials, and local historians.

The history of the first stone schoolhouse in Guelph has always been associated with the family of David Matthews, who held the position of teacher for 15 years.11 Matthews was from Perthshire, Scotland. He was 40 years of age when he was hired as a teacher in Guelph. He had a wife and young family at the time. Matthews was long and favourably known as a zealous instructor of youth.

David Matthews was christened October 2, 1782 at Inchture, Perthshire, Scotland, son of Francis and Margaret (nee Webster) Matthews. He was educated in Scotland and became a teacher. He married Helen Robertson, daughter of John and Isabel (nee Thompson) born in 1790 at Longforgan, Perthshire, near Dundee. David and Helen were married circa 1812 in Perthshire. The family immigrated to the United States circa 1818 and settled at Caledon New York. Two years later the family came to Canada and lived in Dumfries Township, Waterloo County. The family moved to Guelph in 1828.

LIFE AS THE SCHOOLMASTER

As a pioneer teacher, David Matthews was paid according to the circumstances of the early settlers. The fee was 25 cents per month. If the parents could not pay the fee, Matthews accepted the equivalent in flour, pork, wood, or other necessary items as barter. Subjects taught were primitive writing, reading, spelling, and arithmetic. The only textbooks were the Bible, the English reader, a spelling book, and an arithmetic book.12

When the local administration of schools was placed in the hands of township commissioners in 1842, Matthews was reinstated as a teacher in District No. 2, the Town of Guelph school (the Stone School), and remained the teacher until he retired.

During the time David Matthews taught at the Stone School, he purchased a 12-acre farm, consisting of four 1.3-acre lots, where he died in 1852. The farm eventually became part of the City of Guelph, in the north end.

Although no trace of the first stone schoolhouse remains, descendants of its only teacher, David Matthews, still survive in Canada and the United States.

THE LAW FAMILY AND ITS RELATIONSHIP TO THE STONE SCHOOL

In the latter part of the nineteenth-century, the remains of the foundation of the first stone schoolhouse in Guelph were still visible in the brush and weeds a few feet to the north-east of the barn on the property then owned by the Law family.

On April 18, 1873, Francis Law, a fishmonger who resided at 22 Farquhar Street, began to acquire parcels of land between Neeve Street and the Mill Lands, the latter extending eastward to the Speed River from Waterloo Street, now Fountain Street, which ended at Neeve Street. The lands were listed under two separate plans (No. 33 and 296) which were divided into lots. Francis Law bought the lots in both these plans. Later, on December 31, 1877, all of Lot 4 in Plan 269, passed from John Smith to Emma, wife of Francis Law.

In 1878, a stone house was built on the Neeve Street property. At the rear of the Neeve Street property, a frame stable and barn was built in the same year. A separate driving shed was built below the barn to hold a sleigh and another bugry. An ice-house was also built near the main house. Over the years, the barn was converted to a family workshop. The roof of the driving shed disappeared and the ice-house became a garage.

On April 27, 1880, Francis Law purchased Lot 5, Plan 269 from John Smith. Situated on Surrey Street East, this property adjoined the Neeve Street property of Francis Law on the northwest and the Mill Lands to the north and east. The Law family barn adjoined both properties. The 1882 and 1883 Guelph City Directory listed the following: "On the east side of Neeve Street, the residences of Francis Law and George Smith." The 1889 Directory listed: "Frank Law fish dealer, householder, east-side Neeve Street near Bell's factory."

A red brick house was built by Francis Law on the Surrey Street property in 1914, following the death of his wife Emma in 1911. Francis died in 1924, Newton Matthews was the executor of Emma Law's will.

The first tenants were James Brady and his wife Florence Matthews, daughter of John and his first wife Mary (nee Wills) Matthews. In 1917 the house was numbered 136 Surrey Street West.

THE STONE SCHOOL DISAPPEARS FROM GUELPH

Both Farquhar and Waterloo (Fountain) Streets ended at Neeve Street, and a footpath extended from the top of Neeve Street to Wellington Street through the Mill Lands. The site of the first stone schoolhouse was in an area bounded by the CNR tracks to the north, with the Law properties to the west and south, and the Mill Lands to the east. It was south of the footpath.

During the 1930s, the Stull Fur Warehouse, McGarry Coal Company and the Clayton Brassworks were in business briefly until 1937. In 1949, the Smellie family established a transport warehouse - next to the Law property - that lasted for about 20 years. In 1979, the Ziebart Auto Protection Company occupied the same site for a few years. A large part of the area was recently converted to a parking lot, and the path from it to Wellington Street was paved.

During the Great Depression, the area was used as a playground by the Law children, the McKeough children and other children in the neighbourhood. Unlit by streetlights, it was also used as a rendezvous for lovers. It was a favorite haunt for hobos who would stop over on their journey across the country, riding the rails and looking for work.

After the death of Frederick Law in 1955, his properties in Guelph and elsewhere were divided among his children. The Surrey Street property was bequeathed to sons Ronald and Raymond, who were both married and living in different cities. When the will was settled, they agreed to sell the house and divide the proceeds between them.

About 1959 or 1960, they sold the property to Len Ariss, a Guelph contractor who had earlier purchased land adjacent to the 136 Surrey Street properties. Excavators and bulldozers dug into the Mill Lands hill to allow construction of a large office building just south of the footpath.

This operation removed the stone foundation of the first Stone Schoolhouse, extending to the Law family barn on the Neeve Street property. Surrey Street East came to an abrupt end where the red brick Law house at No. 136 previously stood.

The Stone School had totally disappeared, leaving only memories of its central place in Guelph's early history and the stories echoing through its forgotten halls.

With thanks to Susan Ratcliffe.