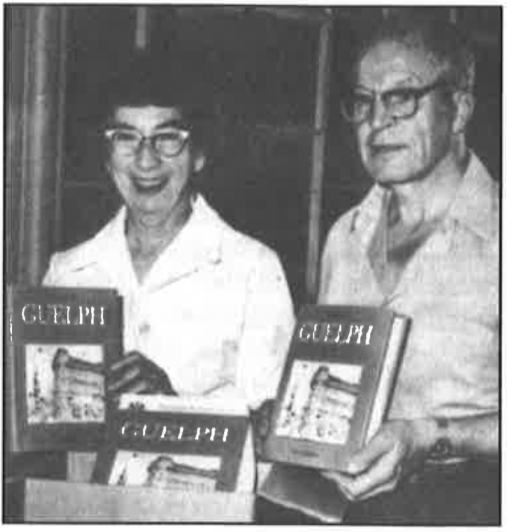 It was with great sadness that members of the Guelph Historical Society learned of the death of Eber Pollard on March 20, 2008. He was predeceased by his beloved wife Ruth Florence Pollard in 2005. For many years, the names Ruth and Eber Pollard were synonymous with the Guelph Historical Society. Theirs was a special marriage and friendship and together they contributed so much to the preservation of both local and Canadian history.

Eber was born in Saskatchewan in 1918. He was a graduate of the engineering school of the University of Saskatchewan. In 1951, Eber and Ruth moved to Guelph where Eber was employed as the chief engineer at Federal Wire and Cable Company Ltd. When the Pollards first moved to the Guelph area, they purchased a stone house in Aberfoyle. It was the beginning of their interest in stone buildings. Over the years, the Pollards restored many stone houses, often doing most of the work themselves. The houses included ones on Oxford Street, lower Dublin Street, Palmer Street, and a farm property in the Paisley Block of Guelph Township.

The Pollards were also well-known as collectors of Canadiana, especially furniture, china, and paintings. Long before it was fashionable to collect pioneer furniture, the Pollards acquired pieces that would be the envy of any collector today. The various houses they restored were graced with these unique antiques.

Together, the Pollards were involved in all aspects of the GHS. One formidable project in which the Pollards were instrumental was the publication of The History of Guelph 1827-1927. Members of the Society provided the background for author Leo Johnson, while the Pollards edited the completed manuscript, and selected images from the Society's archives, the Guelph Public Library, and the collections of Walter Tyson, Bill Steele, and John Keleher. The Society received sufficient grants to publish The History of Guelph. The revenues from the sale of the book, due to careful financial planning of Eber, were invested and directed to fund other programs of the Society.

During their years as President and Treasurer, Ruth and Eber initiated a number of GHS programs. The annual Christmas meeting was a 'show and tell.' Members were invited to bring an antique to the meeting and explain what it was and where they found it. Occasionally, the Pollards would bring in antiques from their collection and the members would try to identify the piece.

Eber is remembered for his selflessness, intelligence, and honesty. He was physically strong and his commitment to an active life is evident in the criteria for the Ruth and Eber Pollard Scholarship in Canadian History, which states that a student must demonstrate, "A passion for Canadian history and ongoing participation in exercise, wellness, or athletics".

When the Pollards retired to Wellington in Prince Edward County, they joined the local historical society and continued to collect antiques and promote the preservation of local history.

Eber was devoted to the growth of the Guelph Historical Society and contributed greatly to its financial stability. Many of the programs the Society provides today are a result of the Pollards' foresight. Their legacy continues in the numerous scholarships they endowed or were created in their memory, and the donations they made to various charitable organizations. Upon his death, Eber generously endowed a variety of heritage organizations across the province. The Guelph Historical Society owes a great debt of gratitude to Eber Pollard.