George Orton crosses the finish line in the 2,500 metre steeplechase run of the 1900 Olympics in Paris, establishing a new world record.

George Orton of Guelph, Ontario was the first Canadian to win a medal at an Olympic Games. He won a gold medal in middle-distance running and a bronze in the hurdles at the 1900 Paris Olympics. It was an amazing feat considering he was physically handicapped as a child. Sadly, few in Canada remember Orton.

George Washington Orton was born on January 10, 1873 to a labourer, Oliver Henry Orton and his wife, the former Mary Ann Irvine, in Strathroy, Ontario.1 Orton was a slight, flaxen-haired boy. At a young age he fell out of a tree, injuring his back and legs. Doctors later diagnosed him with spinal meningitis.2 His medical condition may have influenced the family's move to Guelph. George did not completely regain motor functions until he was 12. His father forced him to nurture strength and mobility by making him walk behind the horse and buggy on his way to school as far as he could each day. Eventually he ran behind the family vehicle and his father entered him in local track meets.3 George, who attended Guelph Collegiate Institute, graduated in 1889.4 Guelphites nicknamed him, "The boy who never walked," because he ran everywhere.5 Soon his prowess as a distance runner was evident. In an interview in the Philadelphia Bulletin on December 18, 1905, Orton recalled:

"I guess I am a product of my own ambition. I began to run when a boy and used to race with all the boys my age in my Canadian home. I found many who could best me at the dashes but as soon as the route became long I killed off my adherents."6

In 1889, he enrolled at the University of Toronto. He graduated second in his undergraduate class with a degree in modern languages in 1893.7 Orton dominated the mile and half-mile runs at the Toronto Varsity Games.8 Representing the Toronto Lacrosse Club, he won races throughout Canada and the United States. In 1892, he set a Canadian mile record of four minutes, 21.8 seconds (4:21.8) that stood for 30 years.9 That year, he also won the first of his six Amateur Athletic Union (AAU) mile titles and the first of seven two-mile steeplechase championships in the United States. Canadian Athletic Association championships were often dominated by Americans; Orton broke the monotony of seeing Americans win year after year. It did not take the United States long to recruit him.10

Orton set American tracks on fire. He won the Intercollegiate American Athletic Association one-mile championship in 1895 and 1897. ln 1895, the Yale team set a trap for Orton; their wily coach entered sprinters in the mile race to set a quick pace. Orton was almost run off his feet when the Yale runners staggered off the track grinning. Tired, but aware he had been set up, Orton vowed not to let his true competitors pass. He struggled on and was shocked to discover he had run the mile in a record four minutes 23.4 seconds (4:23.4).12 His time was the track meet record for 12 years.

"In Belgium, there is an indoor record of a mile 4:27, which I made at night in a meet. The laps were called out in a tongue unknown to me so in order that there might be no mistake I just raced to the front and stayed there until all the others had quit running, and then I knew the race was over." 13

For a decade, Orton dominated middle-distance running and was captain of the University of Pennsylvania track team. By 1900, he had recorded 121 victories, including 31 university, national, provincial, and international competitions. He had 15 United States national titles and 27 second-place and 20 third-place finishes.14 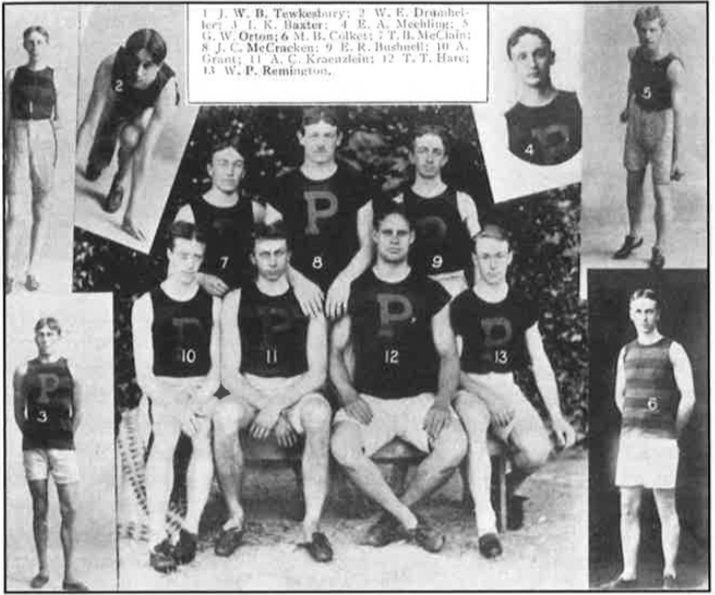 At the age of 27, he was invited to the 1900 Olympics in Paris to represent the University of Pennsylvania. The American team was composed mainly of university competitors. Several other Canadians also competed for the Americans because Canada did not have an Olympic organizing committee or official team until the London Olympics in 1908. Orton was the only Canadian to win a medal. Another Guelph boy, Fred Meadows, joined the first Canadian team in 1908 and placed sixth in the five-mile event.

The 1900 Olympic Games lasted from May 20 to October 8 and were twinned with the World's Fair in Paris. The Exposition Universelle organizers treated the Games, the second modern Olympics, with disdain. Hence the facilities and planning were poor. The races opened on Bastille Day, JuIy 14. Competitors were aghast to see a 500-metre oval scratched out on the bumpy grass through a grove of trees. Parisians would not allow a cinder track to mar their Bois de Boulogne Park. Orton arrived on July 14 to discover he was scheduled to compete in several events the next day, which was a Sunday. Some Americans boycotted the Sunday events because they had been informed that they would have several days to prepare, and others refused to run on the Sabbath.15 Orton's first event was the hurdles. Sawed off telephone poles and a pond acted as barriers. Fifty-eight and a half seconds later Orton claimed the bronze and the first medal by a Canadian at the Olympics.16

Less than an hour later, he was running in the 2,500-metre steeplechase. Orton, favoured to win, kept the pace until the final lap when he burst ahead 30-metres to win the gold and set a world record of seven minutes, 34.4 seconds (7:34.4).17 No other Canadian would win two Olympic medals in track events on the same day until relay runner Marita Payne at the 1984 Los Angeles Olympics. Orton was unable to repeat his success the following day in the 4,000-metre hurdles when he placed fourth. King Leopold II of Belgium presented Orton with a special award for his running achievements. However, there was no celebration back in Canada or hero's welcome when Orton sailed home; only a few lines in The Toronto Star recorded the win.18

Orton retired after the 1900 Games at the height of his career, despite offers to turn professional and compete for large purses. He, however, continued to play hockey, soccer and football for the University of Pennsylvania. He had introduced hockey to the Penn Athletic Program and continued to play until 1934.19 After his retirement from athletic competition, Orton remained in Philadelphia as a teacher and administrator at area prep schools. He served as a language instructor at Eastham Academy from 1897 to 1900, Blight School from 1901 to 1902, and Episcopal Academy to 1905. He had an entrepreneurial spirit and became the first headmaster of the Banks Business College from 1905 to 1909.20 He then returned to Episcopal Academy and served as principal until 1913. Orton coached sports at these schools and developed intramural recreational programs and competitions. He was a founder of the Pennsylvania Relay Carnival, one of the largest amateur track meets in the world. Orton received a silver baton when the 20,000th child participated at the event. A founder of the Philadelphia playground system, he pioneered programs to supervise and develop urban youth.21 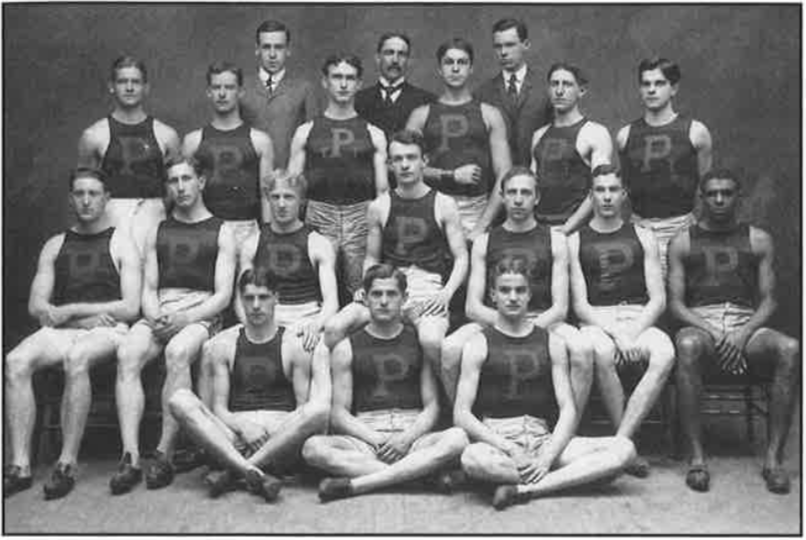 In 1914, Orton became the manager of publicity for the Athletic Association of the University of Pennsylvania and graduate coach of their track and cross-country teams. Training Penn men for Olympic competition was his forte. Orton organized the sports program for the Sesquicentennial Independence Celebration in Philadelphia in 1926. The new Municipal Stadium, with a seating capacity of 100,000, was built to host the event. In 1928 Orton was appointed director of the stadium at a salary of 6,000 dollars per annum. The stadium was under-utilized and Orton was hired to make it profitable. Orton secured Philadelphia as the permanent host of the annual Army-Navy football game. He held the post of director until 1934 when a new political machine swept his patron, Mayor Mackey, out of office.22

Orton also founded summer camps in the White Mountains of New Hampshire. In 1902, with fellow Canadian track star and University of Toronto and University of Pennsylvania alumni, Alex Grant, he established Camp Tecumseh for boys. In 1916 he founded Camp Iroquois for girls. Orton was business-oriented and ran profitable operations.

Orton married Edith Wayne Martin of Philadelphia in 1899. He had two daughters and a step-daughter. Orton's wife sued him for desertion in 1931. He did not contest the suit and they were divorced in 1932.24

Orton was progressive and concerned about urbanization constraining the family's role in raising children. A social educator and reformer, Orton used sports and the great outdoors to prepare youth for adulthood, teaching them responsibility and appreciation for others. In 1941, Orton retired from Philadelphia to Centre Harbor, New Hampshire where he lived with his step-daughter until his death on June 26, 1958 at the age of 85. He stayed healthy and active until age 84. By then he had difficulty walking and had to give up his driver's license. Those who knew him in his last years found it difficult to believe he had once been a world-class runner.25

George Orton received lots of accolades in America. In 1923, the Philadelphia Public Ledger proclaimed him, "The premier American track athlete of all time."26 He was elected to the United States Track and Field Hall of Fame and the University of Pennsylvania Track and Field Hall of Fame. The International Olympic Committee eventually amended their records to accord his medals to Canada. In 1977, years after his citizenship was publicized, Canada finally inducted him into its Sports Hall of Fame. Sadly, the Guelph Sports Hall of Fame has yet to acknowledge him. A century later, little has changed in university sports. Canadians rarely trumpet their heroes and wealthy American colleges continue to recruit Canadians for their athletic programs.