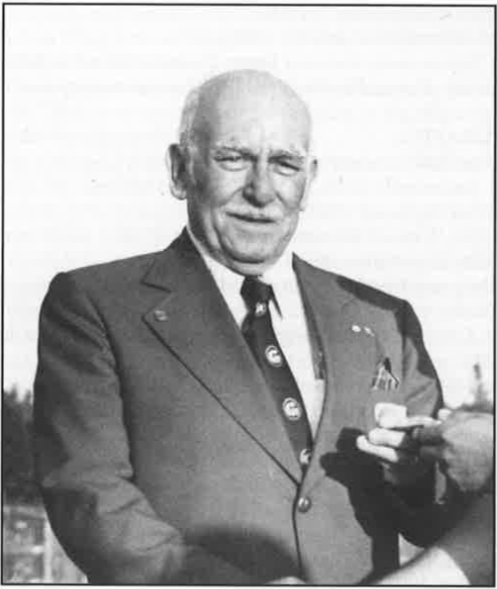 Vernon McIlwraith was born in Guelph in 1973, a son of Alexander H. McIlwraith of 41 Grove Street. As a young man he was a Guelph Mercury paper carrier and worked at the Guelph Creamery Co.

Verne joined the Royal Canadian Army Medical Corps about 1943. A Corporal when he went to the United Kingdom in 1944, he was promoted to Sergeant. After the War, he was assigned to the Civil Affairs Group of the British Army, then in 1945, transferred to the United Nations Rehabilitation Administration  (UNNRA) in Holland and Germany. While in this position, he sent back a number of columns to the Guelph Mercury newspaper.

Following his discharge from the army, Verne joined the editorial staff of the Guelph Mercury in June 1947. He was the first photo-journalist in the city. His columns, 'Current Comments,' 'As it Happened,' and 'Days of Yore,' received wide recognition for their local history and involvement in community matters.

Hugh Douglass and Verne decided to organize the Guelph Historical Society, and Verne promoted the organization in his columns. He also persuaded fellow Guelph Mercury writers, Findlay Weaver and Harold Cole, to assist in the organization of the Society. Meetings were held in the homes of the members.

The first public activity of the young society was on the steps of City Hall, April 21(?), 1961, to celebrate the 134th anniversary of the founding of Guelph. Verne was the program chairman. Over two-hundred people attended this initial event, the first observance of the founding since 1927. This initiated what has become the Society's annual tree planting ceremony. To publicize the event, the newly formed Guelph Historical Society developed and printed an historical bulletin which was distributed to all school children in the city.

Hugh Douglass stepped down as President of the Guelph Historical Society in 1964 and Vice-President Verne took over the leadership. A major initiative of Verne and the Society was to organize a Civic Museum in 1962, the responsibility of which was later assumed by the city. Verne was also appointed program chairman for the Guelph Centennial Committee in 1967. He was replaced as Society president by Eileen Hammill.

In 1972, Verne was very active leading the Guelph Historical Society to join in acquiring and preserving the John McCrae birthplace on Water Street through the New John McCrae Birthplace Society, formed to honor the 100th anniversary of Col. John McCrae's birthday.

Verne 'retired' as a writer from the Guelph Mercury in January 1971, but was made Chairman of the program committee for Guelph's 150th celebrations in 1977.

His awards and recognitions were many. To list a few:

1967 - City hangs his portrait in Centennial area for his 1967 Centennial work.

1967 - Awarded the Centennial Achievement Award and medal by the province.

1972 - Named Outstanding Citizen of the Year

1974 - Named a Member of the Order of Canada by Governor-General Jules Leger. At the investiture he wore a poppy as President of the Col. John McCrae Birthplace Society. The citation for the Order of Canada was for his fifty years of work in amateur sport (Ontario Amateur Softball Association) and physical fitness.

- Past Master, Guelph Masonic Lodge and Royal Arch Masons, as well as the District Shrine Club.

- Long-time member of the YMCA.

Vernon McIlwraith died on April 4th, 1981, at the age of 68. In his will, he left a bequest of five-hundred dollars to the Guelph Historical Society. As a result, President Ruth Pollard set up the Verne McIlwraith Award Essay Contest, the first award being presented at the GHS annual meeting in 1982.