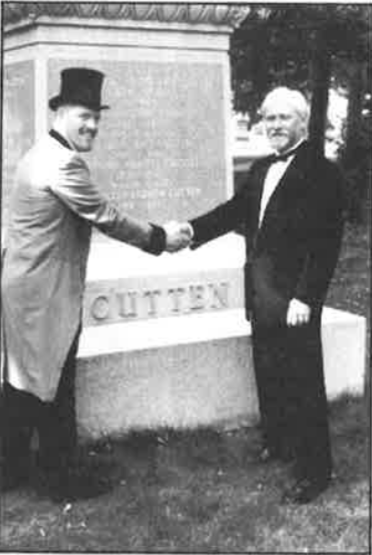 PROJECT WITH A PURPOSE

The annual spirit walk at Woodlawn Cemetery in Guelph is a walking tour with a difference! Actors, dressed in period costume, are stationed at the monument of an influential figure from Guelph's past. As you stroll along the tour route, the characters literally come to life as they recount stories from the early days and details of their lives lived so long ago.

The spirit walk program began in 1997, its purpose being to initiate a yearly fundraiser that would be both educational and entertaining. To accomplish this, the talents and resources of two non-profit organizations were solicited: Guelph Museums and Woodlawn Cemetery, as well as actors from local theatre groups. Woodlawn Cemetery and Guelph Museums were already working together to provide school groups with programs. Interactive walking tours were held in Woodlawn Cemetery, led by museum staff and volunteers, in which students were encouraged to take charcoal rubbings from some of the more historic or artistic monuments. It seemed like a natural progression to create family tours that focused on historical accounts of people buried in Woodlawn Cemetery. People from all walks of life could learn about local history and be both entertained and culturally stimulated. 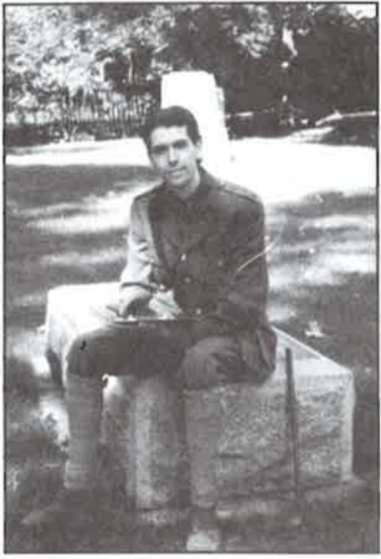 That inaugural year, Paul Taylor, the present General Manager of Woodlawn Cemetery, played Peter Gokey, one of the superintendents in the cemetery's early days and the first to live in the cemetery house. As people came through 'Gokey's Gates,' as the main gates are affectionately known, "Peter Gokey" in top hat and tails welcomed them to his cemetery and the very first Spirit Walk adventure began.

Included as well that first year was Walter W. Buchanan, whose casket is one of more than 300 entombed in the crypts in Woodlawn's historic mausoleum. Buchanan was a local tax collector for 15 years, a valued member of Guelph Township Council, and served with the Guelph Cemetery Commission from its inception in 1919 until an automobile accident claimed his life in 1947. Buchanan gave unstintingly of his time and talents in furthering the interests of the commission, a work that was near and dear to his heart. He served on various committees, particularly grounds and roads and was commission chairman for six years. An article in the local newspaper of 1947 paid tribute to Buchanan, stating, "His sound judgment and tireless efforts have been responsible, in no small degree, for the excellent position the commission occupies and for the splendid condition of the cemetery and cemetery grounds." 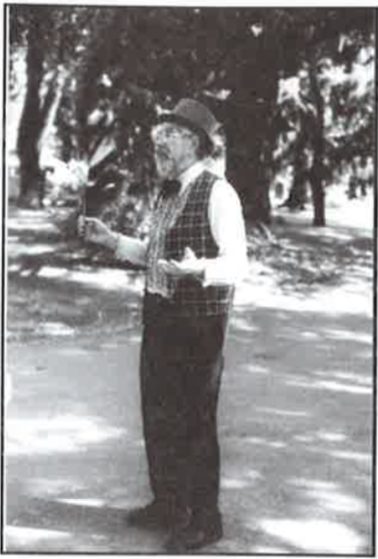 James Gay was also on the first tour. He was born in 1810 and came to Guelph in 1834, from Devonshire, England. He owned a hotel on the north side of Cork Street called 'Gay's Inn' and worked at the British Hotel and the Red Lion Tavern for a time. In the 1850s (in addition to Gay's Inn), he operated the Frog Pond Inn, now known as the Bull Frog Inn on Eramosa Road. Gay married Elizabeth Stanlake, who raised their large family and helped operate the Inn. Gay played the flute when dances were held following cattle fairs in the open market. Unfortunately, this busy and vibrant man contracted a disease known as 'brain fever' which leaves its victims mentally impaired. As a result, he began making up verses, some void of rhyme and reason, and recited them wherever he went. Gay described himself as, "James Gay, poet of the day." Gay worked at many things in his later years, as a gun smithy, mending umbrellas, and as a locksmith. He died on February 23, 1891 and was buried in an unmarked grave in the Anglican section of Woodlawn Cemetery.

Elizabeth Jane Fry, a Quaker 'spinster lady' and well-known herbalist, was also portrayed on the first spirit walk. At the age of 50, she came to Guelph from Wiltshire, England in 1847 to keep house for her two bachelor brothers who lived on a farm opposite the Woodlawn cemetery gates. When her brother William died in 1875, the farm was sold, but a two-acre parcel of land on the corner of the Elora Road (now Woolwich Street) was reserved for Jane where she continued to live and grow herbs. 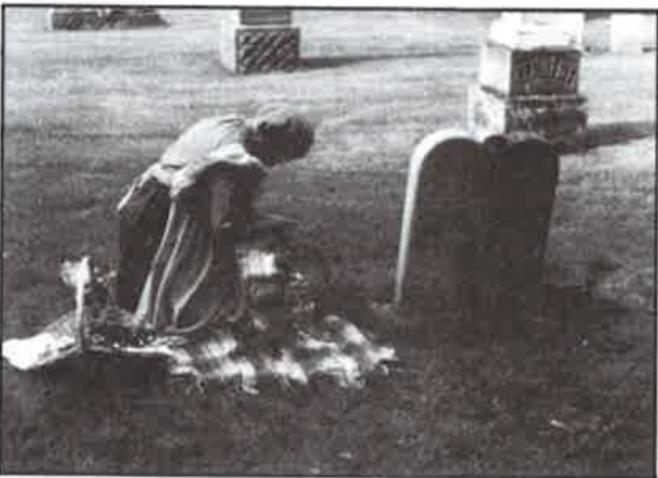 Jane Fry (Judy Seibert) sorts her herbs beside her monument.

Fry was best known for her success in healing obstinate and chronic aches and sores, with people coming from long distances for treatment. Jane prescribed such things as peppermint tea and catnip tea to treat babies' stomach aches. Her salves and prescriptions were made from valued 'receipts' (the old British word for recipes) that she brought from England.

One ounce each of flaxseed, slippery elm bark, boneset, and liquorice. Boil gently for one-and-one-half hours in one quart of water. Strain. Add a half-pound of white sugar and one pint of molasses. Boil and bottle.

Jane Fry was healthy, intelligent and a well-read woman with excellent eyesight. She could read without spectacles and read she did, almost until the day she died on December 6, 1893, in her 99th year. 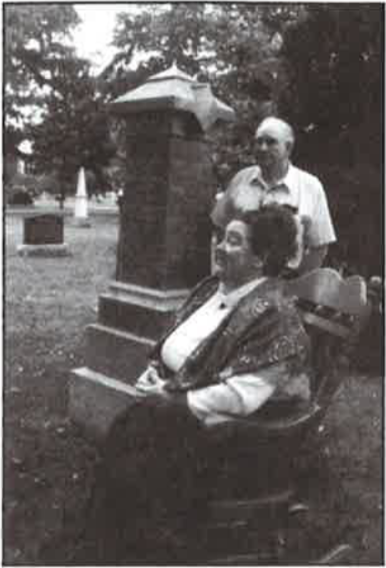 Another pioneer spirit was Janet Blyth (née McDonald), born in 1813 in Scotland. She and her family came to Canada in 1827 with 135 destitute Scottish people known as the 'La Guayran settlers' who had originally been sent to Venezuela by a British land company. Unsuited to the tropical climate and unable to work the inferior land, they abandoned the colony and requested assistance from the British government. Transported to New York, they were directed to the Canada Company's settlement in Upper Canada. Superintendent John Galt waived the charges and placed them on company land. (A plaque commemorating the La Guayran settlers was placed in Royal City Park in 1959.) The McDonald family still occupies the original farm near Marden.

Janet married Alexander Wight Blyth, who purchased property on the Marden Road in 1844 and built the Marden Inn, a major stop for stagecoaches on the route north. Many of the coaches that stopped at their hotel were transporting gold to and from banks. Janet would put the gold on upstairs windowsills so that in case of a robbery it could be quickly shoved out of the building to land in the long grass below where it would be difficult to spot. She often invited local children to view the money, feeling that it might be the only time in their lives when they would have an opportunity to view so much gold.

Guelph Township Council held their meetings at the Marden Inn as early as 1851, paying $24 rent per year. That same year, promoters of the Toronto-Guelph railway held their first meeting at the Blyth tavern. Around 1870, the crew who built the Wellington, Grey, and Bruce railway through this area lived at the Inn. The Marden Post office was also housed in a room there. Janet Blyth's eldest son Colin was the first postmaster. When her husband died in 1872, she continued with the business. This mother of nine children was also a farmer and a tollgate keeper, collecting money for a toll road north of Guelph. Being a frugal lady, Blyth once used a jar of fireflies to light her way at night to the tollgate. Blyth was 92 years of age when she died in 1905. The family plot is part of a 40-acre area, originally called Union Cemetery, that houses some of the earliest residents of this area. 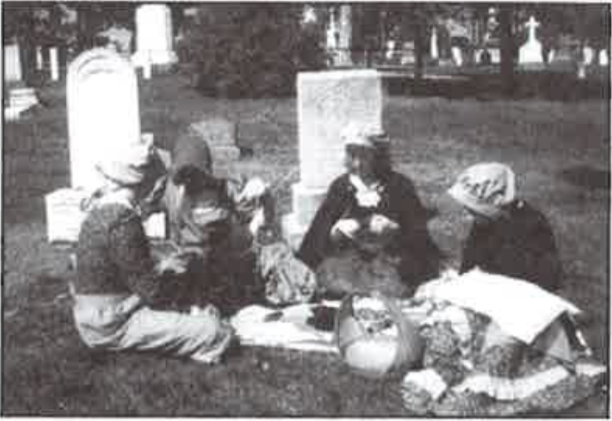 Four of Laura Secord's daughters were portrayed on the 1997 Spirit Walk. Charlotte, Hannah, Harriett, and Laura were depicted enjoying a leisurely picnic while reminiscing about their mother. She became famous for her trek during the War of 1812, to warn British troops of an American invasion.

Five Spirit Walks have been held since that successful first venture in 1997. Usually sold out before the event, potential patrons wait eagerly, hoping that a ticket holder will cancel so that they can attend. The organizers make every attempt to contact immediate family members of the spirits being portrayed and they are provided with complimentary tickets. Family members seem delighted to hear that a relative will be included in the event, and on several walks have participated by inserting anecdotes and stories to bring the characters to life even more. During the 1997 walk, a 94-year-old gentleman named Gib Buchanan attended. His father, Walter, was one of the people to be portrayed on the tour. The actor was notified ahead of time that his character's son was in the crowd. As the actor finished his depiction he walked' up to Gib and said, "Ah, I see my son is here." Gib replied, "It is good to see you again, Dad." As the saying goes, "There wasn't a dry eye in the house."

The Spirit Walk would not be possible without generous donors and the assistance of the many volunteers who perform a wide variety of tasks, including selling tickets, distributing programs, manning the refreshment booth, leading tours, directing traffic and crowds. The actors take their research and character packages and develop their own portrayals. Members of the Spirit Walk Committee, staff and volunteers of Woodlawn Cemetery and Guelph Museums do the pre-tour research, route planning, costuming, grounds preparation, volunteer organization, fund raising, advertising, and brochures. Preparations begin in September, immediately after each event, and continue throughout the year. This overview of the first year of the Spirit Walks, 1977, is intended to be the initial instalment of an ongoing series in Historic Guelph, documenting the wide variety of Guelph and area residents laid to rest in Woodlawn Cemetery.