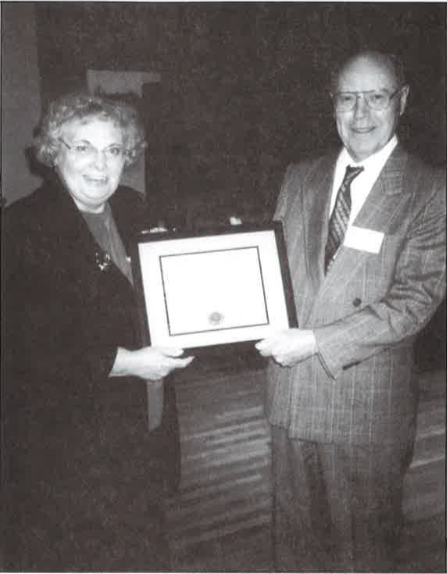 Ross Weston Irwin was born at Cambray, Victoria County. He attended public school at Oakwood and continuation school at Little Britain. His first paying job was 'shouldering' a county road. This involved shoveling dirt and gravel from a ditch to the road's shoulder, with pay of 25 cents an hour. Ross pumped (no electric motor) gas at the local garage and when war broke out in 1939 found work in the tool room of the Dominion Arsenal, Lindsay. By 1942 most of his friends had enlisted, so he joined the Royal Canadian Ordnance Corps (based on his tool room experience) and became an Instrument Mechanic: repairing binoculars, gun sights, anti-aircraft predictors and other optical instruments. He served for 44 months in Canada, England, Sicily, Italy, and North-West Europe.

In 1946, Ross was demobilized and found work in the Induction Motors tool room at Canadian General Electric, Peterborough - pay was now 58 cents an hour. The economy turned down in 1947 and with a new company union and having little company service, he was forced from the tool room to the 4 to 2 P.M. production line. This cramped his love life with his girlfriend, Doreen, so he sought a new path. Since the Department of Veterans Affairs paid month-for-month of service time to study at a university, Ross entered the Ontario Agricultural College (O.A.C.) in the fall of 1947. He was paid $105 a month and was able to save money. The first two summers were spent as a Lieutenant in the Canadian Officers Training Corps at Camp Borden, as it was the best pay. The second two summers were with Prof. Fred Ferguson, surveying farm land, and planning tile drainage. In 1949 he married his sweetheart, Doreen Webster, a farm girl who had graduated in nursing from Ross Memorial Hospital, Lindsay, in 1946. They lived in the trailer camp behind the Ontario Veterinary College until graduation in 1951.

At that time, Ross was hired by the O.A.C. as Drainage Supervisor for Western Ontario at $1,900 per year. The couple moved to Chatham, where along with his regular work of surveying and planning farm drains, he taught at Ridgetown College until the fall of 1953. At this time the O.A.C. had begun a program to upgrade the qualifications of the faculty and Ross was encouraged (pushed) to take graduate work at Iowa State University, with the incentive of one year off with pay. At Iowa, he obtained a M.S. degree in Agricultural Engineering and wrote the State Board exams in Agricultural Engineering and Drainage Engineering, graduating magna cum laude. Returning to Guelph, Ross bought a new house on Paul Avenue for Doreen and his family of John and Carol Anne. His pay was only $3,450 but he needed $3,600 to get a mortgage. Luckily his father came to his rescue. He began a teaching career in water resources engineering, and similar titles. Based on his Iowa experience, he started to teach soil mechanics in 1963 and in 1972 was appointed Professor at the O.A.C. The College had developed a new program in agricultural extension and Ross was appointed Extension Coordinator for the School of Engineering, being awarded the Distinguished Extension Award by the College in 1984. He retired from the University of Guelph at the end of 1987 after 36 years of service.

It is difficult to encapsulate those 36 years of service. During that period, Ross worked with a Cabinet Committee and rewrote the drainage legislation for the province in 1962 and 1974. He spent 20 years conducting research on the subsidence of the Holland Marsh. He was course director for the road schools at the University of Guelph and in recognition was made an Honorary Life Member of the Ontario Good Roads Association. His name is on a bronze plaque, unveiled at the Arboretum in 1981, as a member of the University Arboretum Planning Committee in 1966. For the O.A.C. Centennial in 1974, Ross wrote a history of the Department of Agricultural Engineering/School of Engineering Science. He also organized the Ontario Farm Drainage Association in 1958 and was elected a Life Member in 1987. He continues to serve the organization (now known as the Land Improvement Contractors of Ontario) as Executive Director, edits and publishes their quarterly newsletter and gives advice as needed. In addition, Environment Canada asked him to write a History of Irrigation and Drainage in Eastern Canada, published in 1989. He received the 1998 CANCID (Canadian Committee on Irrigation and Drainage) Award for Drainage and Land Resource Management in recognition of his work and has presented papers for the parent organization in Mexico City, Athens and Amsterdam.

Certified as a Professional Engineer of Ontario in 1956, Ross became Chairman of the Galt-Guelph Chapter in 1964. He also became Chairman of the Engineering Institute. He was appointed a Fellow and Life Member of the Canadian Society for Civil Engineering in 1986 and participated on the Society Historical Committee. In addition, he served on the Engineering Institute of Canada Centennial Medal Committee in 1987. As an outlet for writing, Ross joined the Canadian Science and Technology Historical Association, and at their meetings presented papers on the development of early mechanized agriculture including energy transfer, the Canadian tractor industry, Ontario threshing machine companies, land drainage industry, clay tile industry, and more. In 1976, Ross participated in a Massey-Ferguson Company-sponsored agricultural history course in Washington. This resulted in him promoting, with the Department of History, an annual History of Agriculture seminar at Guelph. The proceedings of this series are a valuable base for agricultural history in Ontario and Canada.

Ross collected a Centennial Medal in 1967 for advice regarding the Institution of the Order of Canada, and a Queen's Silver Jubilee Medal in 1977 as Editor for the Canadian Numismatic Research Society.

"They say hobbies keep you young. I should live forever," Ross Irwin declares.

Stamp collecting started when Ross was 11, but his objectives have changed over time. He no longer collects new issues generated for profit by the post office, but concentrates on Canadian stamps issued before 1953, and Ireland before 1949. His current interest is making a postal history collection for his native Victoria and Haliburton counties.

As an engineer, Ross has always liked mechanical things and began to collect postage meter impressions. He wrote two catalogues on the subject and continued to research, write and edit the quarterly Canadian Meter Stamp News.

Ross started collecting coins in 1952 and became member 585 of the new Canadian Numismatic Association in 1953. Coins were purchased from the mint, searched for in rolls of coins at banks, and plugged into a folder. Collecting an item where only the date was different eventually became a bore, but in 1958 Ross became interested in researching and collecting British war medals. Such items have to be purchased, but each is unique. In time he focused his interest on Canadian honours, decorations, and medals, and has written four books and catalogues on the subject. The Canadian Society of Military Medals and Insignia was formed in 1964; he is member "9." He was also the editor of their newsletter and journal for ten years. Ross was invited to become a Fellow of the select Canadian Numismatic Research Society in 1967. He was also editor of their transactions from 1978 until 1995, and contributed many researched articles on medals. In addition, he was appointed a Governor of the J. Douglas Ferguson Historical Research Foundation, which sponsors the publication of important numismatic books. Through his affiliation with this Foundation, he was responsible for the printing of the 160-page booklet, The Currency and Medals of Prince Edward Island in 1988.

Honours collected in numismatics include the Royal Canadian Mint Award for 1984, the J.D. Ferguson Gold Medal Award for 1988 and the Ontario Numismatic Association Award of Merit.

Ross learned to play alto-horn in the Oakwood village band, which performed at the Fall Fair, the 12th of July parade, and Saturday night ice skating. He played the same instrument with the Peterborough Rangers/Civic Band and changed to the cornet to play in the O.A.C. Band.

With the Chatham Kiltie Band Ross played cornet until he left for Iowa in 1953. He played trumpet in the Guelph Musical Society/Guelph Concert Band in 1964, but changed to the euphonium in 1975 and to Bbb bass in 1990. In 1996 he retired, due to failing eyesight in reading the music. He was music librarian for the Guelph Concert Band for many years.

Ross started to climb his family tree in 1958 and had the benefit of the reminiscences of his father's eldest sister. It proved to be an all-encompassing interest. He printed a brief outline in 1964 but has since begun a more comprehensive family history, for which the research is complete, but the time for writing scarce.

Ross' family always held an interest in local history. In 1959 he decided to write a history of his home village of Oakwood, but inevitably the book extended well beyond the village boundary. He 'printed' 30 mimeographed copies in 1964 before the 1967 interest bulge in local history) and had them bound by Guelph's Nunan Bindery. This project gave him a sense that more needed to be done, so he continued to research the Lindsay Post and in 1984 published 1,500 copies of A History of Mariposa Township, Victoria County. It took him 10 years to sell it! Any profit or recovery of cost is in the sale of the last 100 books, according to Ross.

In 1970, Ross first spoke to the Guelph Historical Society, became a member, and contributed an article for Historic Guelph the following year. He was not especially interested in Guelph history then, but continued as a member until he went on sabbatical to the U.K. in 1976. His history library at that time was concentrated entirely on Victoria and surrounding counties, but over the years, his wide interest in historical research has manifested itself in many articles on aspects of the history of agriculture in Ontario, and in church histories.

Upon retiring from the University in 1987, Ross was invited to join the Guelph Wellington Men's Club, was soon on the Executive and became President for 1992 to 1993. He rejoined the Guelph Historical Society in January 1992 and entered the GHS Essay Contest where he shared the prize with two other entrants. The Society was looking for a President and N.R. Richards encouraged him to take the position, which he did in January 1995. Ross had two major objectives: a new constitution, which would prevent the President from serving more than three years (the previous one had served 20), and publication of Guelph's history post-1927 (which was where the first book on the city's history ended). Both objectives were realized. During that period, Ross became interested in the history of Guelph and began to read, research, and write about it. For his efforts, he was awarded the Ontario Volunteer Service Award in 2000.

Note: No one will dispute that Ross Irwin is a good amateur historian and researcher and most importantly, he enjoys sharing his findings with others. The Guelph Historical Society is certainly the beneficiary of his efforts.